Welcome!  Thank you for visiting my website….I’m glad you came!   I would like to share information regarding the growth and progress of our city since I became a council member in November of 2008.

Exciting time to live in Greenwood not stagnant but  Vibrant & Growing!

I am both honored and privileged to have been elected to serve as your Council representative for the last 11 years.   I believe it is important to be involved and give back to your community.

Please do not take this out of context but I do not solicit or accept donations for my campaign.  I believe by paying for one’s own campaign you eliminate any reference that a vote in favor of something may have been a payback related to a campaign contribution.

March 29, MIBOR Realtors announced their endorsement of my candidacy for Greenwood Common Council-District 1. Their endorsement demonstrates their confidence in my commitment to both my community and the responsibility of my Council Office.

I declined their $1000 campaign contribution in light of my commitment to self funding my campaign.

There are many special events, projects and developments that have taken place during the last ten years. 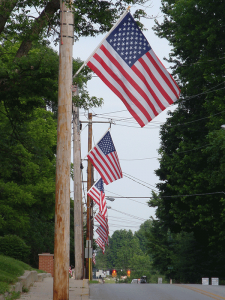 One of my most cherished memories was standing along Madison Avenue looking at the patriotic American flags that had just been hung by Barry Inabnitt and his team.  The flags were gently blowing in the breeze.  Without a team of citizens volunteering both their time and donations, the “Avenue of Flags” would never have been possible. (No city funds were used in the purchase of the American flags.)   The Avenue of Flags proudly fly along nearly 25 miles of our city streets. 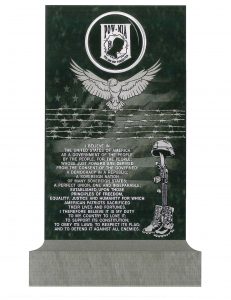 Private Project, Another great addition adjoining Surina Way at Meridian Street will be the home of a memorial honoring our veterans, police, firefighters and EMT’s.  A rendition is nearing completion. Our committee announced the creation of the memorial April 29th. Our fund raising efforts are going well. The projected dedication will be in June 2020, prior to the Freedom Festival. EVEN THOUGH THIS IS NOT A CITY PROJECT IT IS STILL VERY CLOSE AND DEAR TO MY HEART!

I’m equally excited about recent completion of the E-Commerce Exchange Zone at fire station 91, which serves as a safe location for people to buy, sell or exchange goods.  In addition, it provides a safe environment for custodial and non-custodial parents to exchange children.   Lastly I’m looking forward to the installation of School Zone Flashers  to alert drivers of school zones.  Both of these projects were brought to the attention of the city by me.

I’d like to provide you a little background about myself.  I married John Gibson, a school teacher at Southport High School, in late June of 1967.  John preferred not living in the same community as his students so there would be no question of favoritism.

After shopping over nine months trying to find a home we could afford, in a good school district and close to a bus line to Indianapolis…..we chose Greenwood!  Our home had three bedrooms, was situated on a somewhat “U” shaped street with very little traffic,  surrounded by mature trees and comfortably positioned on two lots.  Little did we realize what a fortunate decision we had made.  Greenwood felt like home almost immediately.

In September of 1967, John was invited to join the Greenwood Jaycees.  John visited a couple of meetings and was impressed with the community service projects they were undertaking.  By October he had joined the Jaycees and I had joined the wives group (the Jayshees).  There were many projects the Jaycees were involved with throughout the city.  However, as with everything there are always special projects you forever hold close to your heart.  Back from 1967 through the mid 70’s when my husband and I were active in the Greenwood Jaycees we worked on several community projects.  Three of those hold wonderful memories of the major changes we were helping to achieve right here in Greenwood. 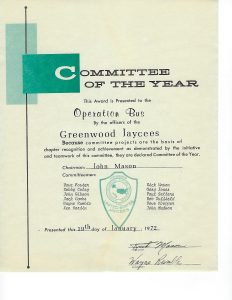 The first was selling bricks to raise money to build the current concession stand for the Little League at Craig Park.…which is still in use today.  The second one, the Jaycees and wives collected “Top Value” grocery store trading stamps to purchase the very first school bus for Gateway Learning Center.  I can tell you it was a lot of stamps….TO FILL A LOT OF BOOKS!  We (6-8 of us) would sit around a Formica topped dining room table with a wet beach towel down the center and put stamps in the stamp books Saturday evenings.

The third one, I chaired in 1975.  It was raising money by having an All Night Skate at the BIG RED BARN.  I went to talk to Jeanette Surina about donating the use of the barn and allowing us to have an All Night Skate to raise money for a new “Operation Life” ambulance for the fire department.  Those of you who knew Jeanette will hear the sound of her voice saying “Doll, I’ve never had an all-night skate before but lets do it!!!  The fire department was on stand by and we had so many children they couldn’t begin to fall to the floor as there wasn’t enough room to get there!!  Children could not leave until the following morning unless their parents arrived at the door to pick them up.  We served donuts, milk and juice the next morning before bidding a farewell to our skaters.  What a night was had by all!

At the Jaycee State Convention our club received the “Project of the Year”!

By 1974, we had been blessed with two children and no longer had a guest bedroom to accommodate my in-laws when they visited from out of town.   We began looking for a home that had more room but didn’t realize how spoiled we had become by our location.  After  several months of searching, we realized most of the homes we considered were newly built, would require lots of time landscaping, were absent of the mature trees plus we had and had also grown very fond of all our neighbors….we made yet another major decision.  Since we had the two lots, we had plenty of room to add on to our existing structure, would not have major landscaping to accomplish and we would remain in the neighborhood we had already fallen in love with.

Fast forward to 1982, John was in Chicago for a business meeting.  We had been searching for a little old antique pickup truck.  We had found a 1931 Model A pickup in Warsaw, Indiana but soon decided a  pickup wasn’t very appropriate for us to travel in as a family.  Reluctantly, John told the gentleman he was going to pass on buying the pickup.  What he didn’t know was that the kids and I immediately contacted the owner and made arrangements for it to be delivered while John was in Chicago.  I still remember the grin from ear-to-ear on John’s face when he pulled in the drive and spied the pickup! 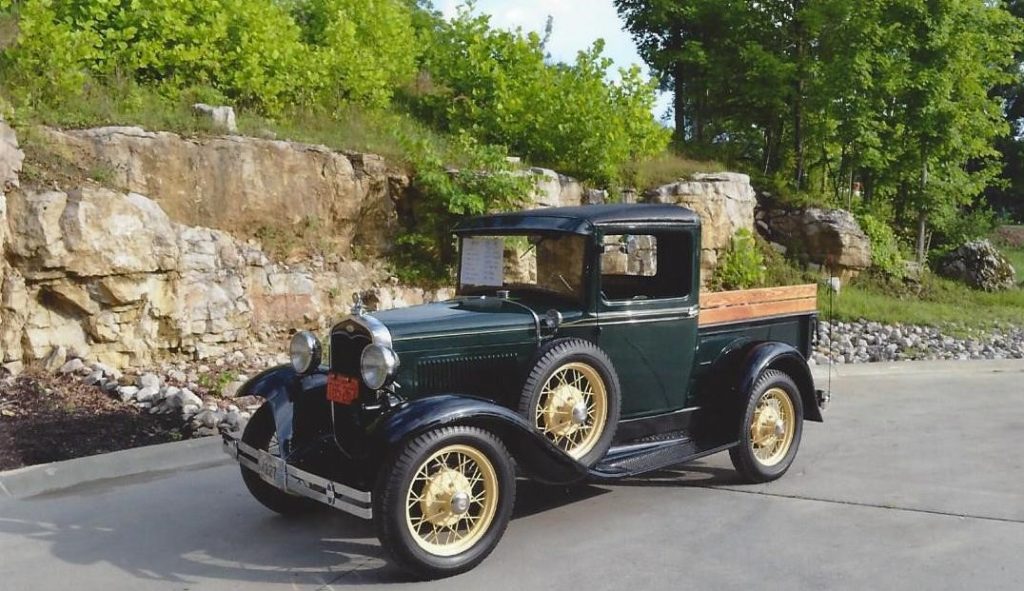 In April of 1983, we had located a 1930 Fordor Model A in Wichita, Kansas.  We traveled to Wichita to pick it up.  It was totally apart and needed lots of tender loving attention.  By June of 1984, it was assembled, painted and “Little Miss Bess” was ready for her maiden voyage to the Model A National in Itasca, Illinois. 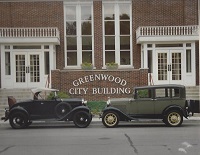 Miss Bess has transported us over fifty thousand miles.  She escorted us to Dallas, Jacksonville,  Wisconsin, Minneapolis, Missouri plus several trips to the Carolinas and New York.  As we would travel through the small towns we would notice the American flags gallantly waving in the breeze along the main streets.  John and I admired the patriotic pride these towns were displaying as they honored their veterans.  It was on one of the trips that John finally told me that Greenwood didn’t have the money to purchase flags as there was too much infrastructure that needed attention.  His words were “If we want flags it’s up to us to do it!”  Thanks to the leadership we had acquired from our Jaycees training, we didn’t flinch.  We rolled up our sleeves, wrote letters and hand delivered them to local businesses.  As a result of individuals and businesses sharing our vision, we all worked together and within just a couple of months we had acquired what we now refer to as “The Avenue of Flags”. 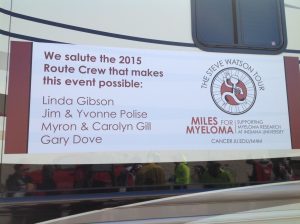 Volunteer significant hours annually to assist in planning and working the annual “Miles for Myeloma” (M4M) event to raise funds for research and better treatment options for multiple myeloma cancer patients.  Drive SAG, help identify route and securing police escorts in high traffic areas so our athletes can safely bicycle throughout Indiana and surrounding states.  The athletes have rode over 2000 miles.  We have raised over $5 million since inception in 2005.  The research has helped win approval of new drugs, developed methods to alleviate debilitating symptoms.  Now the average patients are living longer 7 years up from the 5 year average in 2008….when only 33 1/3 % of the patients were surviving 5 years.

Pedals of Joy – Brain storm of John & Janna Philllips -New program of volunteers refurbishing unclaimed bicycles.  Working with counselors at Greenwood Schools these bicycles will be given to children in our city so they may also enjoy one of the simple pleasures in life by having their own bicycle to ride.

I feel very blessed that John and I settled here in Greenwood.  John was first elected in 1979 and served 29 year on the City Council.  It was challenging for me to find my new niche when John died as a result of the cancer beast.  John nor I neither one gave any thought or discussed between us the possibility of me running for a seat on the city council.  It wasn’t until various individuals whispered in my ear during John’s calling at church…..“You should submit your name to fill the remaining 3 years of John’s council term” that I gave the idea any thought.   I discussed it with my children, close friends and others in the community the week following John’s death.   After giving it serious consideration I realized there was still a great need to serve in my community.  The experience I had gained those 29 years that John had been on the council would be very beneficial.  I could continue to have a positive impact by helping residents of our city.  I WANTED TO CONTINUE TO MAKE A DIFFERENCE!

I had appreciated the opportunity of having been on the sideline as John had helped people with their problems/issues.  Even though there was opposition, I received the nod by the precinct committee people.   I absolutely feel both honored and privileged to have been chosen by you to serve as your council representative from District 1 for the last 10 years.

Thank you for the confidence you have shown in me by electing me 2 additional terms.  I am hopeful you will allow me to continue serving you for the next term of 4 years!

My Pledge to you! 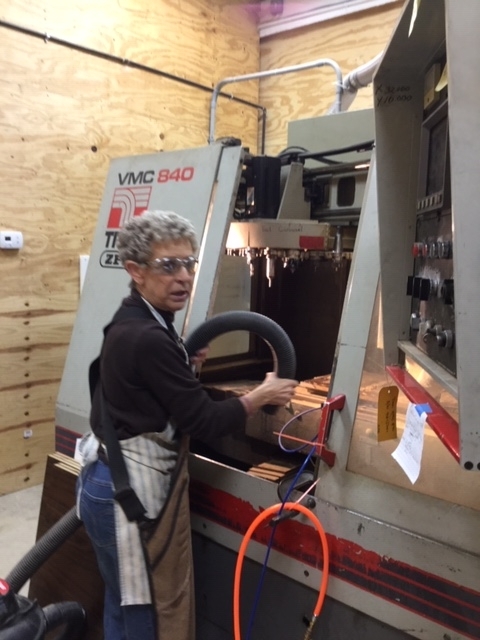 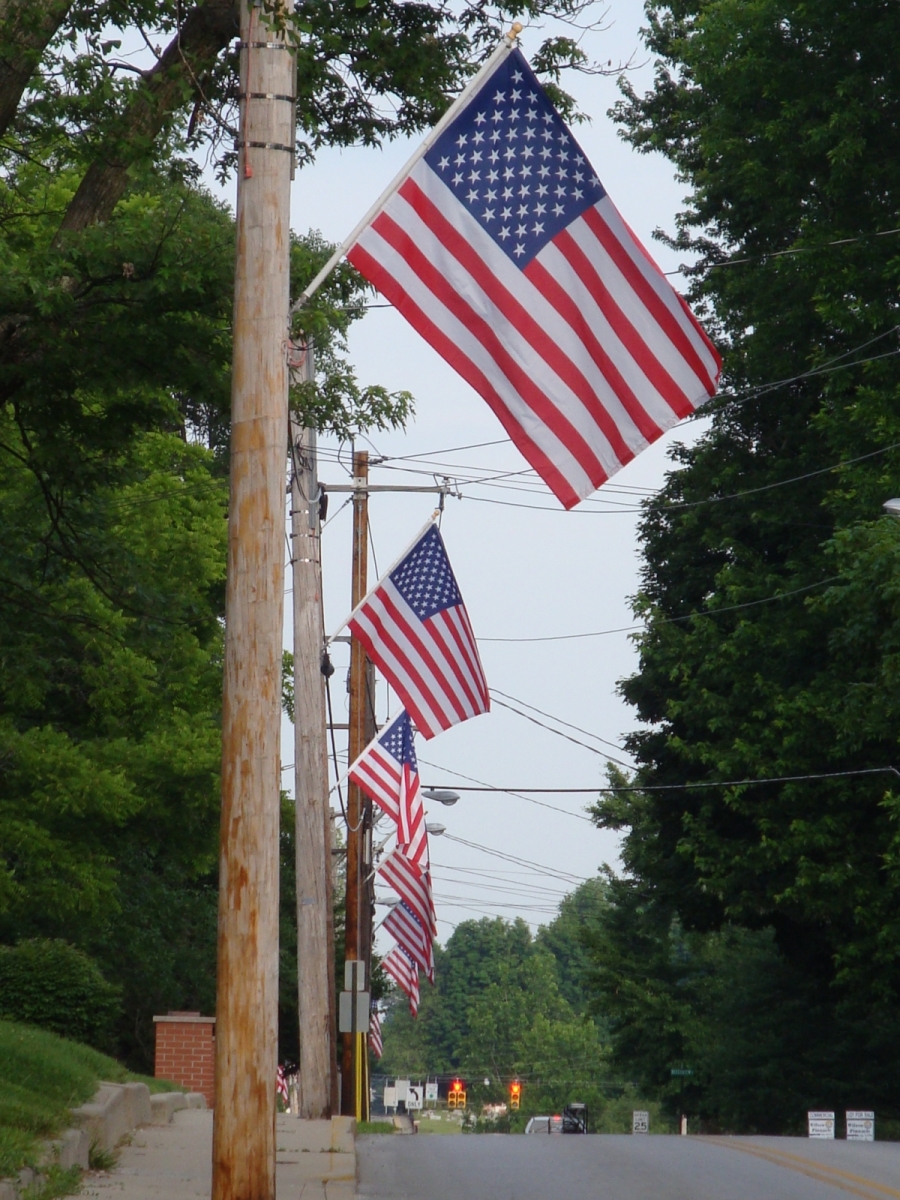 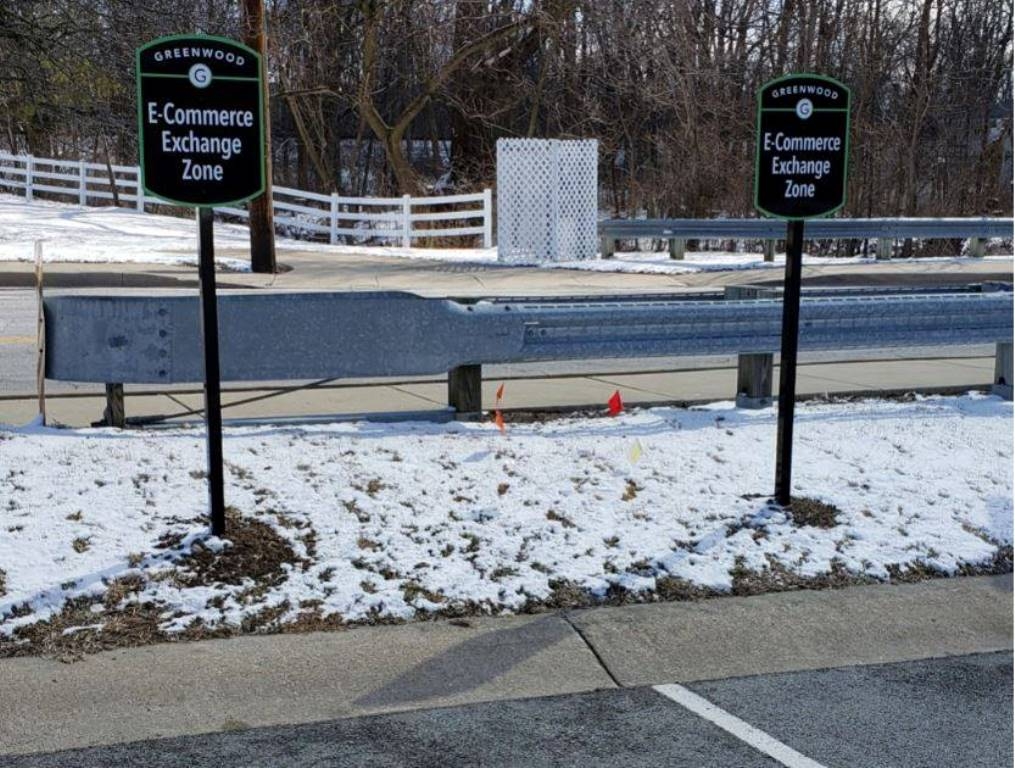 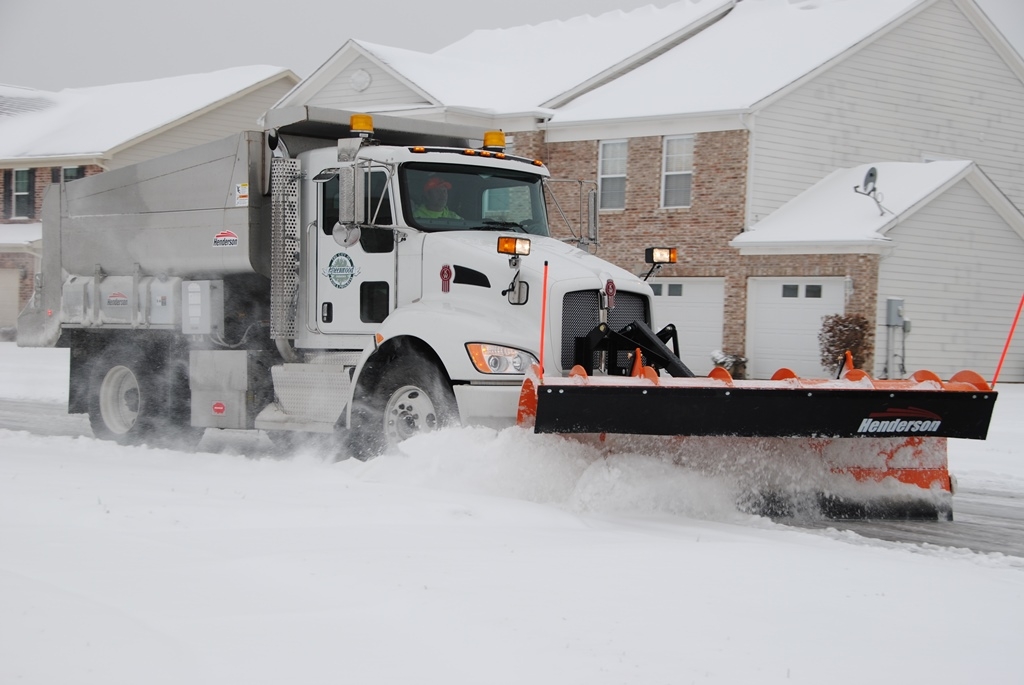 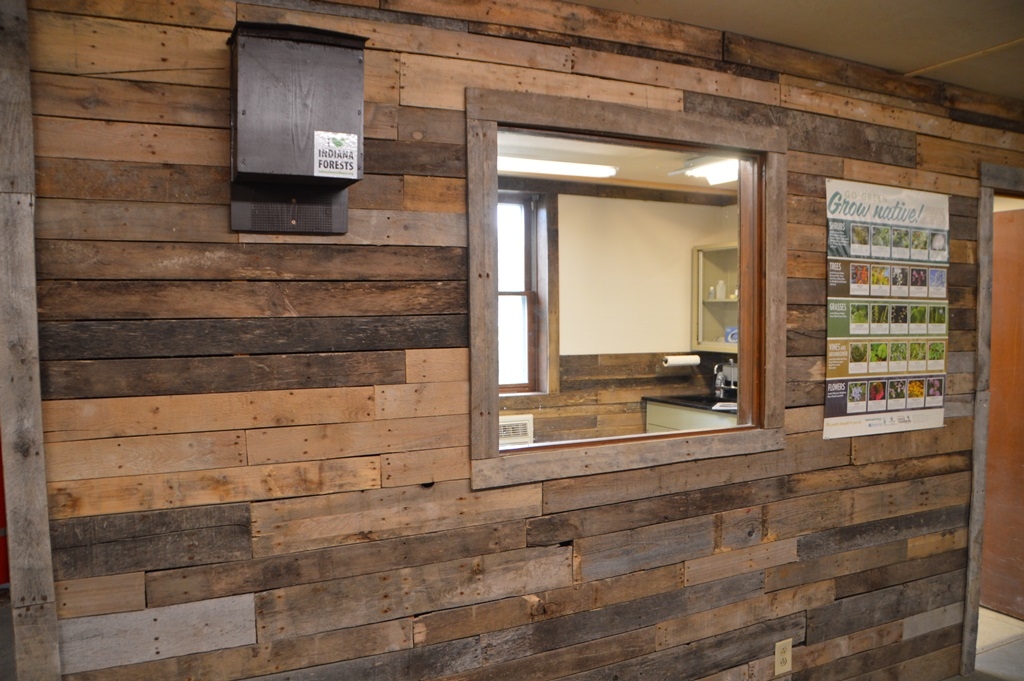 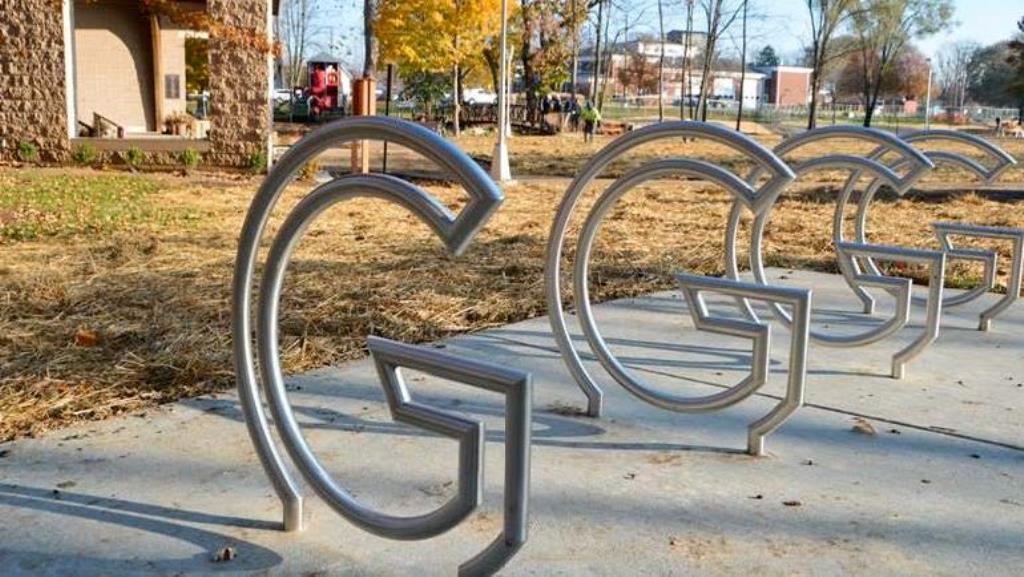 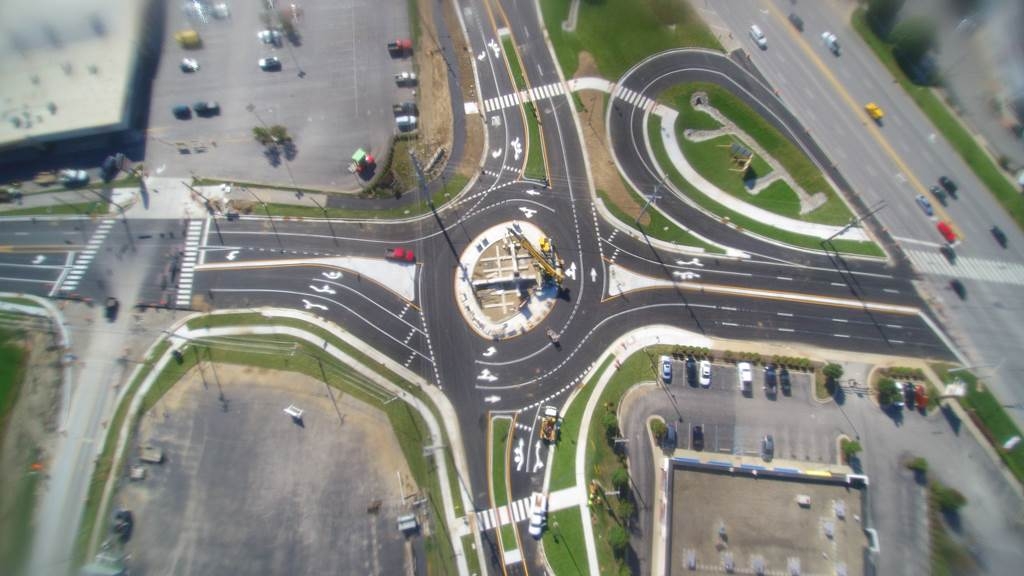 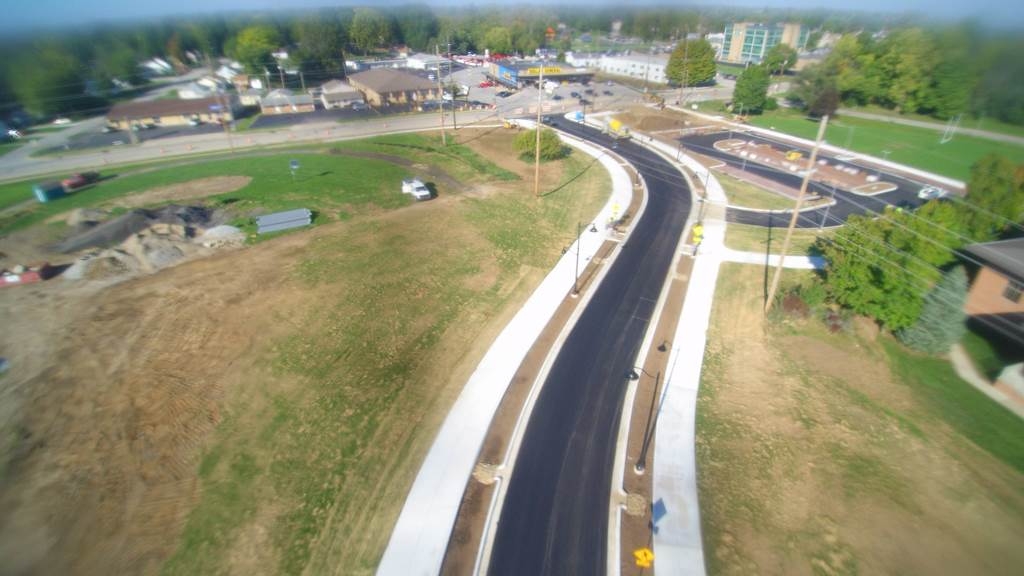 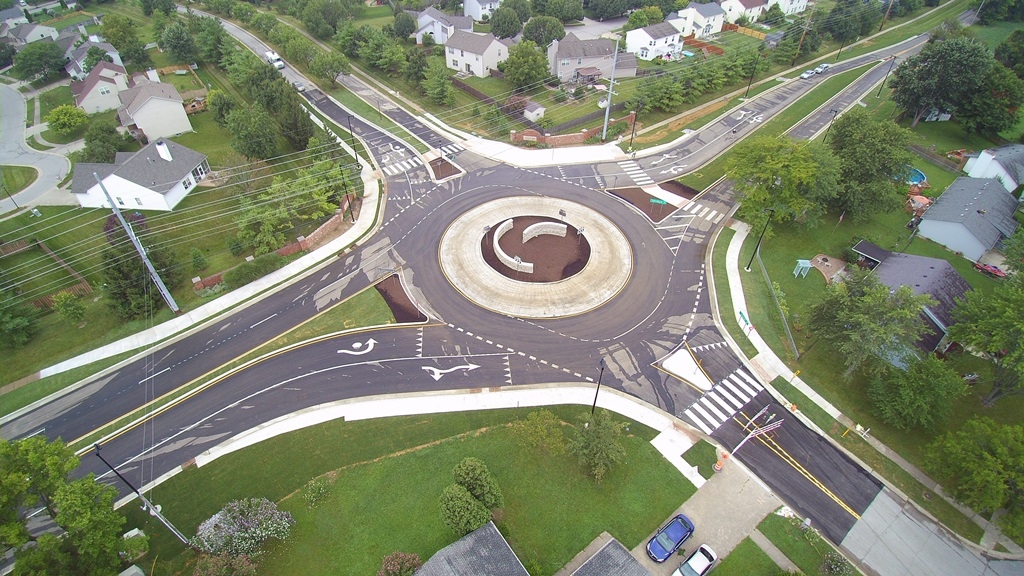 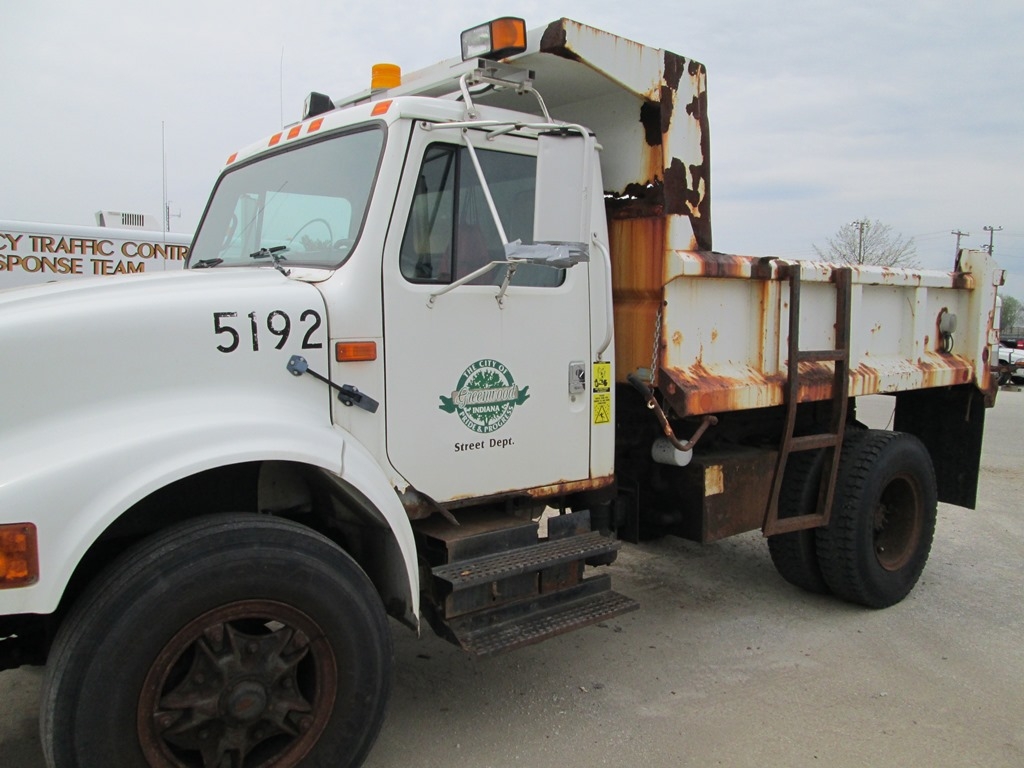